Thailand is one of the world’s most renowned and primed tourist destinations. It’s no surprise as it is blessed with pristine beaches, delectable cuisine, gorgeous temples, rich history, natural landscapes, cultural sites, and architectural wonders. As you walk around Bangkok and visit other attractions in the country, you may wonder how such a beautiful country fared during World War II. Well, let’s delve deeper into that! Read on below to discover how Thailand was impacted by global conflict.

Thailand made pragmatic decisions during the onset of World War II, opting to be neutral to the military and political pressures of the war. The country was then under Prime Minister  Plaek Phibunsongkram’s rule, an assertive nationalist and modernizer who aimed to bring the Thai people to the new world, while still keeping and emphasizing the nation’s unique identity.

Part of his campaign was reviving the nation’s irredentist campaign, looking to recover all the territories in Cambodia, Laos, and Myanmar, which the country had lost to France. Looking for support against France in French Indochina, Phibun started establishing closer ties with Japan.

While the nation was solid in its desire to claim its lost provinces, not all agreed to Phibun’s militaristic ways, which appears to be propitiative towards the Japanese. Many leftists and conservatives from the country treated his foreign policies with lots of qualms. 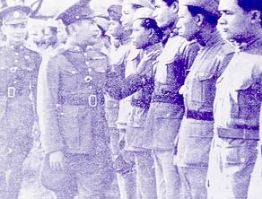 Sporadic combat eventually occurred between the Thai and Vichy French forces in October 1940, signaling the Franco-Thai War. It started along the country’s eastern frontier, ending in January 1941 with the invasion of Cambodia and Laos.

Thai forces were triumphant in getting back the disputed lands in French Indochina. Meanwhile, the French’s sole success was only during the Battle of Koh Chang, where they scored a tactical victory at sea against the Royal Thai Navy.

It was during this war when the Japanese mediated. With its influence over France’s Vichy regime, Japan was able to get concessions for Thailand. As a result, France “promised” to relinquish its control over nearly 35,000-mile territories in Laos (West of Mekong) and Battambang, Cambodia.

Phibun’s notoriety was boosted with the supposed victory against European rule and Thailand saw the return of its lost lands. However, it was the Japanese that immensely benefited from said conflict, keeping its good relations with France, while positioning itself better in its intent to invade Malaya and Burma in the future.

Japan never really wanted to invade Thailand, as it needed the country’s airways, railways, and ports. Starting a conflict with the Royal Thai Force won’t be fruitful, either, as it would impede their invasion and immensely affect the element of surprise.

In the end, Thailand was forced to take only a quarter of lost territory from France, plus they were required to pay the latter six million pastries as a grant. Dismayed with what has transpired, the country’s relation to Japan began to dwindle.

Phibun also started to switch sides, pursuing the support of the American and British governments in preparation for what he deemed was a looming invasion of the Japanese. He compromised with the leftist, and it is when the Thai government established its neutrality, only engaging in war should it need to guard its independence from foreign nations.

When the Pacific War started, Japan began pressuring Thailand to give the Japanese troops access to invade Malaya and Burma, which were then under British rule. With its stand to stay neutral, the Thai government was reluctant to be a part of the Allies and side with the Japanese.

Japan gave a two-hour deadline to grant their request for passage. Thailand didn’t respond, ensuing the Japanese invasion on December 8, 1941. After a five-hour-long conflict, Thailand eventually gave way to Japan’s demand. Later on, both signed a mutual defense pact.

As Thailand has now served as the base for Japan’s invasion of Burma and Malaya, the Allied forces started bombing its capital Bangkok. Pressured by the Japanese Empire and the attack, Phibun was forced to declare war against the United States and Britain on January 25, 1942.

While the government’s ambassador in London submitted the war declaration to Britain, Seni Pramoj, Thailand’s ambassador in Washington, D.C., and anti-Japanese did the opposite. He refused to deliver the declaration of war to the United States. Thus, the U.S. also didn’t declare war on Thailand.

Instead, Seri established the Free Thai underground movement, which recruited students to work for the U.S. government’s Office of Strategic Services (OSS), with the agency training them for underground activities. Meanwhile, Pridi Banomyong spearheaded a clandestine pro-Allied resistance, which at war’s end had over 50,000 Thai personnel to combat the Japanese.

Phibun’s close ties with the Japanese became fruitful during the early years of WW2, as the territories once under the control of Bangkok were reclaimed. With 150,000 personnel in Thailand, Japan meantime has constructed the infamous “Thai Death Railway (Burma-Siam Railway)” where over 12,000 Allied prisoners of war and more or less 100,000 force laborers have died.

The Japanese presence in Thailand became more displeasing as WW2 continued, with the foreign allies acting more as suppressors. As such, public opinion and the support of political elites shifted against Phibun’s government and his military. He met his downfall in June 1944, after being forced from office by the civilian government.

All in all, Thailand remained relatively unscathed during the course of WW2, as compared to its neighboring countries in Southeast Asia. The country was still a Japanese ally when the war ended, but the U.S., who was never formally at war with the country, stood up for the nation. Wartime claims were dropped with the new civilian government ceding its claim to the northern Malaya and Shan states to Britain. The latter however demand rice shipments going to Malaya, as war reparations before signing the peace treaty.

Today, Japan is one of the country’s primary trading partners. Crimes and military alliances committed during WW2 were already buried in the past. On the other hand, Thailand has been a U.S. military ally since 1952.